As summer turns to fall, the garden may seem to fade into the background. But there's still plenty of action going on underground, so this is no time to rest.

For starters, your plants still need water. Although their thirst will wane as temperatures cool, perennials, trees and shrubs in colder regions actually require extra water in early autumn to help them prepare for (and successfully emerge from) dormancy.

In cooler zones, plant pansies for a dash of fall color. They'll die down over winter but return to bloom again next spring until the heat of summer does them in. In warmer zones, the pansies will keep doing fine so long as winter temperatures don't rise above 80 degrees.

Add other seasonal bloomers to the garden or containers, too. Chrysanthemums, asters, and colorful ornamental kales and cabbages are good choices.

Those gardening in the southernmost parts of the U.S., like South Texas and Florida, can plant another round of tomatoes, peppers and eggplants.

There's no need to pull up declining crops if they're still producing. Take what you can from them until they die down on their own, then clear beds of plant debris.

Planting a cover crop such as clover or rye in vacant vegetable beds will help suppress weeds, control erosion and add nutrients to the soil. Come spring, just turn the ground over and plant your next garden. Avoid using legume cover crops in beds where you plan to grow legumes like beans or peas, however.

To speed decomposition, sprinkle a bit of nitrogen over each layer and keep the pile slightly moist, turning it every so often with a pitchfork. By next summer, you'll be able to enrich your soil with "black gold."

To prepare for spring planting, test your soil's pH now and add amendments like lime, if indicated, and compost, which will work their way deep into the ground over winter.

Avoid fertilizing everywhere except in the South, where some turfgrasses may benefit from an early fall application of a slow-release product. But observe local fertilizer restrictions to protect the ecosystem and prevent waste (and, potentially, fines). During the South's rainy season, for example, nitrogen is likely to be washed through the soil into groundwater; in the North, cooling temperatures prevent the absorption of fertilizers, which also can leach into groundwater there.

Both scenarios pollute our precious resources and waste money, as unabsorbed fertilizer won't benefit your lawn or plants, anyway.

Southern gardeners should feed citrus trees now, but not during rainy weather. Use a slow-release product to provide long-lasting nutrients and avoid leaching and runoff.

Rejuvenate the lawn, but core aerate it first. Seed once a week and water lightly every day until it's 3 inches tall.

Transplant and divide spring- and early-summer perennials and groundcovers, but don't disturb late-season bloomers until spring.

Fall is a good time to plant trees and shrubs. In cold zones, it's best to wait until the trees in your area drop their leaves. Water well and apply mulch.

Cool-season crops, like beets, radishes, greens and broccoli, can be planted in many temperate climes now.

Finally, do your future self a favor and keep on top of weeds. Pulling them up by their roots before they set seed will significantly reduce their numbers next year.

You'll thank yourself in the spring.

5 common ailments in vegetable gardens and how to treat them

You started seeds in spring and watched as they sprouted, then watered, fertilized and even staked plants as they grew, while visions of summer salads, grilled vegetables and homemade pickles danced in your head.

Then one day, black blotches, yellow-spotted leaves and mushy bottoms showed up, and your dreams turned to nightmares.

Many home gardeners lovingly tend their plants only to find them ravaged by unknown forces before harvest time.

But fear not: Here are some tips for identifying and treating five of the most common ailments that threaten your crops.

Treat infected plants with a fungicide containing chlorothalonil or copper, carefully following the instructions and safety precautions on the package.

Prevention measures include testing the soil's pH before planting. If results are lower than 6.3, incorporate dolomitic lime into beds according to label directions.

Avoid damaging the roots by installing stakes and cages around tomatoes at planting time, instead of when plants — and roots — are larger. And don't plant a vegetable garden in or near a lawn that receives fertilizer, which can raise the nitrogen level of the surrounding soil.

Treat affected plants by drenching leaves with a calcium spray until the product drips off. Fruit produced after treatment is usually symptom-free, although sometimes a second application is necessary.

Zucchini, squash, cucumber and muskmelon plants die quickly after blooming, without so much as a goodbye. But if you look closely, you'll see the small puncture holes in the bottoms of stalks and stems caused by these pests, which start life as moths that lay eggs at the base of plants. Inch-long white caterpillars follow and bore into stalks, killing plants as they chew their way around and out. And just when you think the damage is done, they cocoon in the soil until the following year, armed and ready to repeat the carnage.

Prevent damage by monitoring susceptible plants closely. Watch for red, flat, oval eggs early in the season and pick them off by hand. Keep hunting every week.

And if you find signs of damage like punctures and frass, their sawdust-like excrement, use a razor blade to slice affected stems open near the holes and manually pick out the borers. Cover the slits with mounded soil to encourage new root growth.

If necessary, treat plants with Bacillus thuringiensis, or Bt, a bacterial insecticide (several versions are available; seek the one labeled as a control against squash vine borer).

This is one instance where a good offense is the only defense: Avoid infection by planting resistant varieties (check plant tags for V, F, VF or VFN, resistance indicators for verticillium wilt, fusarium wilt and nematodes). Rotate crops by keeping infected beds free of susceptible plant species for three or four years, essentially starving the disease of a host to clear the pathogen from the soil. And regularly clean up fallen leaves, fruit and plant debris.

Get ahead of the slithering miscreants with a spring cleanup that clears leaves, plant debris and slug eggs from the soil surface, and keep mulch no deeper than 3 inches to avoid creating a haven.

Sink a small can or jar into the soil around affected plants, leaving about an inch exposed above ground, then fill it halfway with beer. Slugs will crawl in for a drink and drown. Alternately, if you aren't squeamish, you might go into the garden at feeding time (overnight) and sprinkle a bit of salt on each of your little visitors. As their bodies attempt to dilute the irritant, slugs will dehydrate and die. But don't be tempted to sprinkle salt around plants. Doing so would risk damaging the soil. 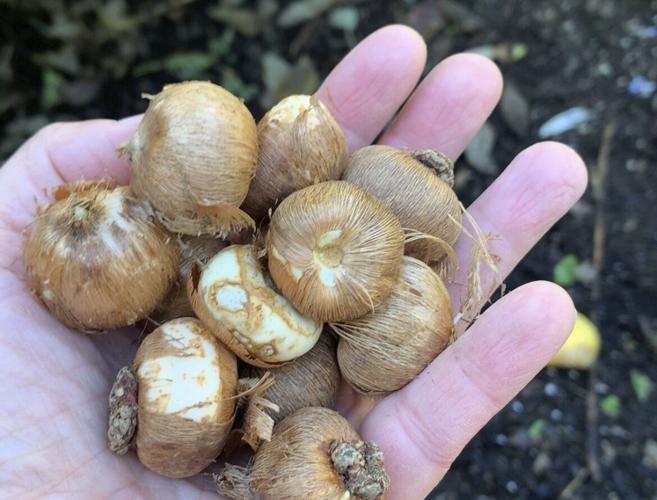 This November 2021 photo shows a handful of spring bulbs. 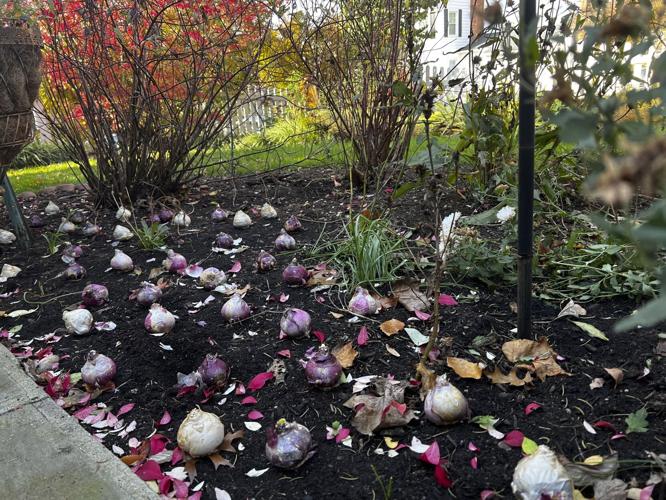 This November 2021 image shows fall bulbs in place for planting.